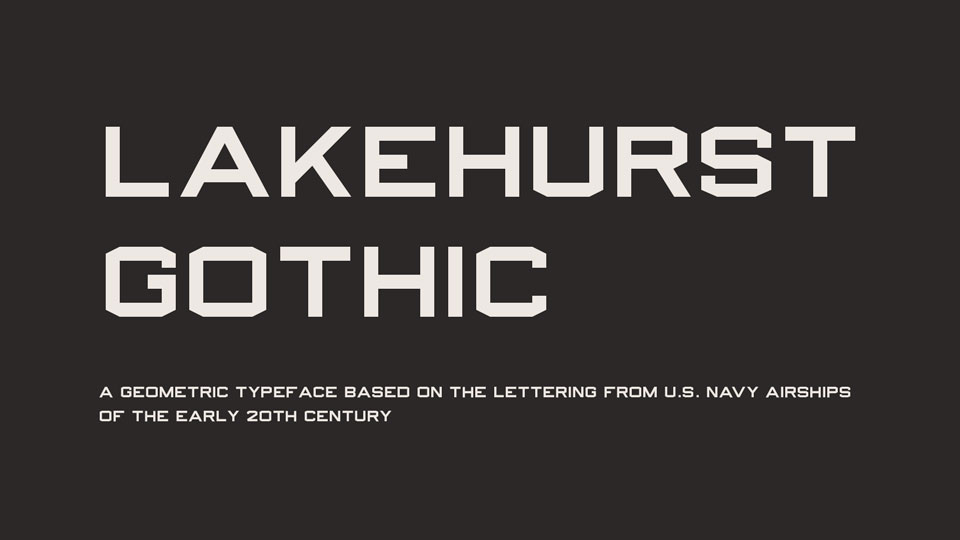 Lakehurst Gothic is a typeface based on the lettering used by the United States Navy’s LTA (lighter-than-air) program. The names emblazoned along the sides of the envelopes of the great Navy airships (U.S.S. Shenandoah, U.S.S. Los Angeles, U.S.S. Akron, U.S.S. Macon) bear a resemblance to Bank Gothic (a contemporary) and Microgramma, but with several key differences that give them a character all their own.

As there are few orthographic depictions of the face, and because it was likely hand-painted on the vessels’ hulls, the design has been copied primarily by eye, with characters missing from available samples created from scratch, using the contemporaneous Bank Gothic as inspiration. A measure of artistic license has also been employed to make the face appear more consistent and aesthetically pleasing when not used solely for typesetting the names of Navy airships.

Lakehurst Gothic is named after the former Naval Air Station Lakehurst, in Lakehurst, New Jersey — the location from which much of the U.S. Navy’s airship program was operated, the location where the U.S.S. Shenandoah was constructed, and also the site of the 1937 Hindenburg disaster.

Lakehurst Gothic font is free for personal and commercial use.

Thanks to Lauren Herda for sharing Lakehurst Gothic typeface.